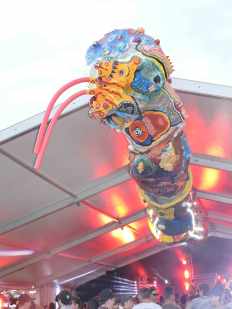 The groovin’ grub is dressed in red. 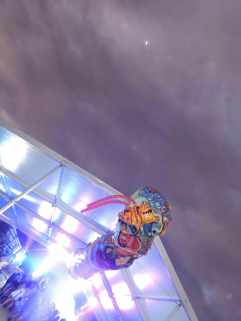 The groovin’ grub is out of this world.

The 10 metre caterpillar that I was paid to facilitate the creation of by Umbrella Studios and which was funded by the Groovin the Moo festival waits to be lifted to just under the roof of the tent. Eighty people worked on the creation of this mighty grub and it took over 600 hours. It is made from chicken wire and papier mache. It was transported in three pieces in a removal van and then joined together on site. It took a 10 hour day and a lot of people power to move, join and then suspend her.

We all hold our breath as the grub starts to rise.

The grooving grub is loaded into the removal van.

Lynn is a visual artist and writer with over 35 years experience. She has a Master in Creative Arts degree from James Cook University.
View all posts by Lynn →
This entry was posted in Uncategorized, Visual Art and tagged groovin grub, Groovin' the Moo festival, groovygrub, Lynn Scott-Cumming, Townsville, Umbrella Studio. Bookmark the permalink.

1 Response to The Groovin Grub waits to takes flight